If you are having problems with QCAD 2.1/2.2, post here. Please report bugs here.

I am trying QCad as newbie and maybe I have a problem with a simple solution.

I have drawn a small mechanical part with a size of 19x5mm.
This is normally too small to be printed out 1:1. As I read in the
manual, I should draw in 1:1, and a scaled output could be done later
by scaling the printout.

Is there a way to avoid this?
Thanks for any help.

You can change the arrow size, distance to dimension line, etc. in the drawing preferences:
http://www.ribbonsoft.com/qcad/manual_r ... r32.html#4
Top

Thanks for the fast answer.


You can change the arrow size, distance to dimension line, etc. in the drawing preferences:
http://www.ribbonsoft.com/qcad/manual_r ... r32.html#4

Of course.
But that means, that I have to scale down the timension text, ect.
1:5 in that case.

If I decide later to print it out 2:1 than I have to change all the
dimension text, arrows ect., again - boring.

In my opinion the dimension text, arrows. ect should always
be of the same size on the printout like the linewidth.
Top

In my opinion the dimension text, arrows. ect should always
be of the same size on the printout like the linewidth.

Your suggestion sounds very good at first. However, if you think it through you will quickly realize that it is not possible to create a drawing that can be printed at any scale without making any modifications to dimensions and text labels.

The bottom line is: Before you even start drawing you need to define the scale you will use to print the drawing. This scale is cast in stone from that point on. A skilled draftsman knows at all times the scale of the drawing he's currently working on. This is one crucial difference between a professional CAD and a simple painting, drawing or presentation tools where the exact scale for printing does not matter.
Top

I am a bit disappointed by the 'official' reactions to this discussion. I have been an occasional user of QCad Community Edition for quite a long time now and I am a real fan except for this issue. Why for example should the user have to redefine text height and arrow heads to 25mm in a 0.1 scale drawing to get it to print to 2.5mm size on an A4 sheet? Surely if the preference box says text height 2.5mm it should print this size just as a 0.5mm line does actually print at 0.5mm? When I was at school drawing on paper these items were pretty much always drawn the same size regardless of paper size or drawing scale. The fact that QCad doesn't do this looks more like a bug in the handling of preference data rather than a feature.
I see this as a real weakness in QCad which could be resolved by separating print page dimensioned features ie line width, text height, dot spacings, hatching size etc from the drawing scaled features. This would not adversely affect the intuitive usability of QCad at all since it would still be possible to create the drawing with real world dimensions and later scale it to fit the printout page. It does not seem to me to be a big step for QCad to scale the drawing preference data according to the printer page size and final drawing scale. Surely this would be better?
Top

Thanks for your input marsh. Please allow me to illustrate what would happen if QCad would indeed behave as you suggest.

This is a simple drawing created at a scale of 1:1 (that means that it is meant to be printed in real measures on paper): 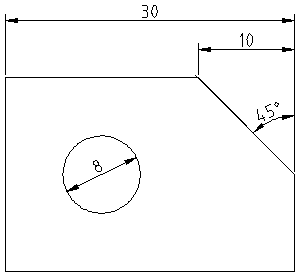 Let's see what would happen to the dimensions if you later decide to print this drawing 2:1 and QCad would keep the dimension properties as you suggested:

As you can see, changing the scale of a drawing requires you to recreate the dimensions. There is no way around this since adjusting the label size and arrow size is not sufficient.

The bottom line of this issue:

Again, and I cannot emphasize this enough: As a drafts person you have to define your drawing scale before you start to draw anything. The drawing scale cannot be changed later without causing a lot of trouble. The placement of the dimensions, text labels, leaders as well as the arrangement of different views in your drawing depend on your drawing scale. A good drafts person knows the scale of the drawing s/he is working on at any time. If you take a CAD course, this is one of the first things they should teach you. If not, please remind them to do this

I hope I am not labouring this issue too much. I appreciate the trouble Andrew has taken to explain this point but I fear that he has also missed the point. Andrew explains quite rightly what will happen on the CAD screen but he has not explained what will happen when it is printed out on paper. Taking Andrew's example sketch scaled 4:1 as the starting point, if it is printed out with QCad default settings for dimension measures, the character height will only be about O.6mm on the page which is unreadable, though it may look OK if you zoom in on the screen. If the dimension settings were scaled, they would be readable on the print, albeit somewhat crowded. Conversely, if QCad is allowed to scale the same entity to fit an A4 page, the character height will be about 15mm, assuming in both cases that a default dimension text height of 2.5mm is left in the preference box. Neither of these produce an acceptable scaled drawing, only the 1:1 drawing really works. When the image is scaled away from 1:1, it is still the case that something needs to be done with the text and dimension measures to produce a decent looking and readable drawing, as well as have something you can see on the screen. At either extreme, these parameters need to be brought back to some preferred size in the final print. I still maintain that this size on the final print should be the one chosen in the Drawing Preferences Dimensions box. Yes, there will be crowding of the dimension data if entities are scaled very small but, ultimately, that is a consequence of trying to put too much information onto a paper sheet which is too small whilst keeping it readable. Nonetheless, control of the final image should remain with the draughtsman who should able, based on the screen view, to decide whether to choose a smaller text size or leave things out and put them in a scrap view or in another drawing. As it stands, the QCad solution for addressing this requirement involves some inelegant manipulation of Dimension Preferences because the sizes which need to be set for the drawing attributes are non-intuitive and involve scaling the dimension preference data to suit the extents of the drawing.

Andrew quite rightly says that the extent of a drawing should be determined before work begins and the draughtsman should decide the scale but QCad does not provide the facility to set the scale at the outset. Even if the scale is set in the Print Preview box at the start of drawing, it does not have any functional effect during on the user interface with the application, only at print time. If QCad permitted definition of a scale in the Drawing Preferences dialogue, this information could be be used to scale the drawing attributes so that dimension data could be read on the screen and in print especially for entities which are considerably larger than the drawing sheet. However, the need to set a scale seems to contradict the usability philosophy of QCad. QCad invites the user to draw first and then scales the image to fit the printed page or allows the user to manipulate the extent of the drawing relative to the printer page in Print Preview mode. At this point a scale is established.

I think there is potentially a simple and neat solution to this problem. QCad should use the scale factor defined in the Print Preview to modify automatically, in background only, the drawing preference settings so that the drawing attributes for the printed page match those specified in the drawing settings. Once the user has defined the extent of their drawing relative to the print page, this would adjust drawing parameters to provide a readable drawing, avoid the non-intuitive manipulation of drawing settings and maintain the intuitive usability of QCad. It would also show, on screen, the consequences of any potential crowding of dimension data etc whilst the drawing is being created. If this idea should be adopted, could I take this suggestion one step further and propose that the scale setting dialogue box in the Print Preview mode view should be replicated in the Drawing Preferences Dimensions dialogue box, so that the user can, if desired set a scale at the outset of the drawing creation? At the very least it would be wonderful to have a dimension scaling facility as a configurable option in Application Preferences.

As an afterthought for readers of this topic, I would also point out that the overlapping of the dimension text and dimension lines shown in Andrew's scaled image has occurred because it was originally drawn at 1:1 scale and then scaled down. If the draughtsman had applied a scaling factor to the dimension measures before dimensioning had taken place, to suit the extent of the printed image, he would have seen the dimension text shown in larger size on screen and would have been able to place the dimension lines further apart from the start. Scaling of the dimension measures does not automatically cause crowding unless it is applied after dimensioning has taken place. This is further reason to facilitate setting up scaling of these measures before drawing starts.
Top
Locked
8 posts • Page 1 of 1

Return to “QCAD 2.1/2.2 Troubleshooting and Problems”